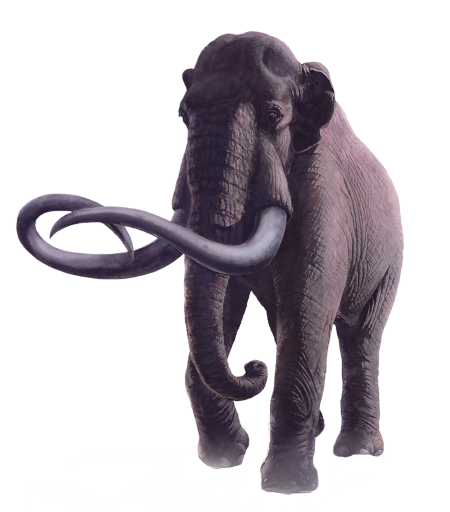 La Brea Tar Pits has been hosting a behemoth-size gathering of late — Mammoths and Mastodons at La Brea Tar Pits. Before you join the herd, here are some truths and mysteries about the group of mammals called proboscideans (the name comes from the proboscis, or trunk), which includes elephants, mammoths, and mastodons. Two of these, the American mastodon and the Columbian mammoth, were lumbering around the L.A. region during the last Ice Age and got stuck in the gooey asphalt seeps. Inside the museum, visitors can see the fossil bones of those creatures that were excavated from the Tar Pits. They can also come face-to-trunk with life-size replicas of those prehistoric stars and their giant relatives.

Mammoths and mastodons went extinct about 11,500 years ago (they lasted even longer on some islands, disappearing about 4,000 years ago on Siberia’s Wrangel Island). But why? Scientists theorize one of these could be the answer:
Overhunting. We know humans hunted the beasts because we have found spear points and other tools among, and even embedded in, their bones.
Climate change. Earth started coming out of the last Ice Age around 18,000 years ago, but a global cold snap around 4,000 years later may have thrown things into disarray. Scientists believe that both the warming and the rapid reversal could have caused shortages of the plants that mammoths and mastodons ate.

We usually think of mammoths as roaming in huge herds across vast open lands, but some lived in the most restrictive environments of all: islands. There, over thousands of years of evolution, they survived — by shrinking! Pygmy mammoths (who once lived on California’s Channel Islands) required less food to stay healthy in a smaller territory. How did they get to their island home? They swam from the mainland — a crossing of seven miles or more.

Visitors to La Brea Tar Pits will also see a show-stopping pair of incisors on display. They belong to Zed, the adult Columbian mammoth whose near-complete skeleton was excavated from Project 23 (one of the large wooden boxes that contain fossil deposits that were recovered during the construction of a nearby parking garage).

What can you tell by looking at these ginormous incisor teeth? Age By studying their structure, scientists can determine how old they were when they died. Environment Tusks grew faster (more layers were added) during the Spring and Summer growing seasons when the plant eaters’ food was more abundant. Behavior Markings on tusks can reveal evidence of an animal’s illness or even battle scars.

Mammoths and Mastodons was created by the Field Museum, Chicago.