Stories of Extinction and Survival

Solving the mysteries of the Tar Pits

Saber-toothed cats, dire wolves, horses, coyotes, and giant bison — just a few of the many creatures we find in the La Brea Tar Pits. Most of these species went extinct at the end of the last Ice Age (though horses were reintroduced later from Europe), but the coyotes sailed on through. Why is this? How did some species survive while others died out?

This is one of the many mysteries we encounter when we look at the fossil record in the La Brea Tar Pits. 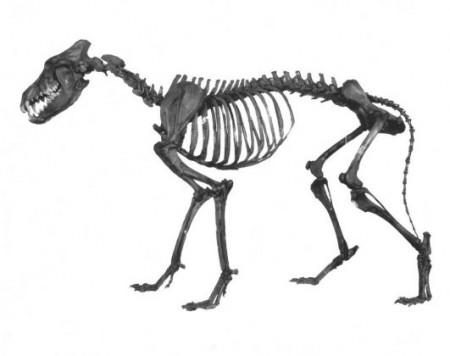 A dire wolf skeleton from the La Brea Tar Pits.

Without a time machine, the best way to answer these questions is to study every detail of the fossils we have to piece together the story of what happened with each of these species leading up to their extinction (or not). These five particular species are the subjects of a new collaborative research study funded by the National Science Foundation.

“This study will help us understand how each of these species adapted — or didn’t — to California’s changing ecosystems when earth went through the last major episodes of global warming,” says La Brea Tar Pits Curator Emily Lindsey. “We are hoping that the answers we find could help us save species threatened by current climate change and other human impacts.”

With the help of undergraduate and graduate students, researchers will be examining and re-examining tens of thousands of fossil specimens from these five species, taking detailed measurements of each bone, looking at the wear on their teeth, and sampling over 400 individual animals for stable isotope and radiocarbon dating analyses.

In these tests, special machinery analyze small bits of bone collagen or tooth enamel to determine the different ratios of carbon, oxygen, and nitrogen isotopes, which are different forms of these elements. Carbon, for instance, comes in three common isotopes — carbon 12, carbon 13, and carbon 14. The numbers indicate how many neutrons are in the nucleus of these atoms. Carbon 12 and carbon 13 are stable, but carbon 14 is unstable, and it slowly decays over time at a constant rate, which means it can be used to figure out how old a fossil is.

The vast majority of the over 3.5 million fossils at the Tar Pits have never been isotopically analyzed. The process is complicated and expensive, partially because the asphalt that did such a good job preserving these fossils so long ago is also a contaminant that can throw off radiocarbon dates and other analyses, so you have to remove every trace of it, which is difficult and time-consuming. But once you’ve done that, the isotope ratios can tell you a lot. For one, they can tell you approximately how old each fossil is, which means these researchers can assemble the very first detailed timeline for the animals’ entrapment in the Tar Pits. 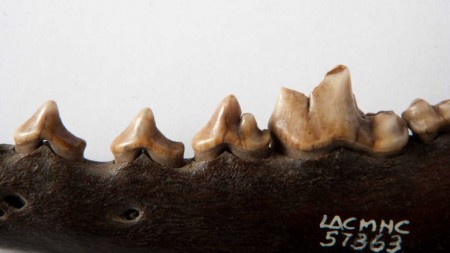 A coyote jaw from the La Brea Tar Pits.

As an added bonus, we can use other isotopes  to figure out what sorts of things these animals ate when they were alive, like if a bison was grazing on grasses or was browsing on shrubs, or if a coyote was eating mostly meat or mostly plants. How can some isotope ratios do that? Different kinds of plants — whether they’re grassy or shrubby — and varying amounts of meat leave different ratios of carbon and nitrogen in the bodies of the animals who eat them. So thousands of years later, we can get a glimpse into these long-dead animals’ diets, and a better idea of what was most available for them to eat.

The team will also look at the wear on these animals’ fossilized teeth, like paleo-dentists. By analyzing wear or cracks in teeth, they can get another glimpse into the diets of these animals. In coyotes and dire wolves, a lot of broken teeth might mean that in tough times, they were desperate enough to try eating more animal bones to get by.

At the same time, the team will be looking at the measurements of the bones throughout the body, such as leg bones, shoulders, and ribs. These fossils will show if and when populations of these different species changed in size over time.

The team will put all this information together to get a clearer picture of these Ice Age ecosystems to make sense of what happened to the saber-toothed cats, dire wolves, horses, coyotes, and bison. Did they change their diets at the same time as the animals were growing or shrinking in size? Do these shifts line up with climate changes or the extinctions of other animals? And, another big one, do they line up with the arrival of — gasp — humans? 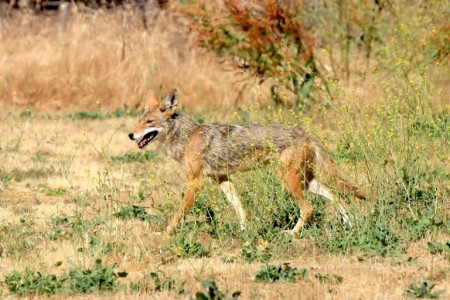 iNaturalist user andreacala took this photo of a coyote roaming in the Los Angeles area on June 13, 2018.

Understanding how size, diet, and behavior in big mammals like these are related can teach us valuable lessons about the limits of animal adaptation to climate changes. Most importantly, this can help us better understand how we can protect today’s wildlife, so they don’t go the way of the dire wolf.