Not Another Boring Bush

A couple of weeks ago, I stopped Daniel Feldman in the Nature Gardens. “What’s happening these days? Where’s the action?” This is my customary question for our Head Gardener here at the Natural History Museum when I am looking for insects to photograph, and he knew exactly what I meant. “The coyote bush is about to bloom. It’s just getting started. You should see a lot more action over there in the next few weeks.” I turned toward the hedge Daniel had indicated, and pulled out my phone and the clip-on macro lens attachment that has become my constant companion. And so began my love affair with the coyote bush.

This particular coyote bush, or Baccharis pilularis, is the female cultivar called “Centennial” that I have blythely walked past hundreds of times without ever looking directly at it. Although nondescript at first glance, Baccharis turns out to be a particularly versatile plant.

According to Carol Bornstein, our Director of Living Collections, these native flowering bushes are especially malleable--they can be maintained as formal hedges or pruned less regularly and left to sprawl. A single specimen can even grow to 6 feet tall and wide. They bloom in the fall, not in the spring, making them especially attractive to insects at this time of year. Evergreen, drought-tolerant, and a veritable pollinator magnet--I want one in my garden at home! (Carol recommended Theodore Payne Foundation as an excellent source, although other nurseries may carry them or special order them.)

Over the past couple of weeks, I have visited this Baccharis hedge many times, and it is always teeming with insect life. I have seen tiny orange hoverflies zipping around, green-eyed sand wasps with zebra-striped abdomens, shiny blue blow flies with big red eyes, iridescent sweat bees, big Toltec scoliid wasps with curled antennae that look like old-timey handlebar moustaches, and delicate gray hairstreak butterflies collecting nectar from the flowers. 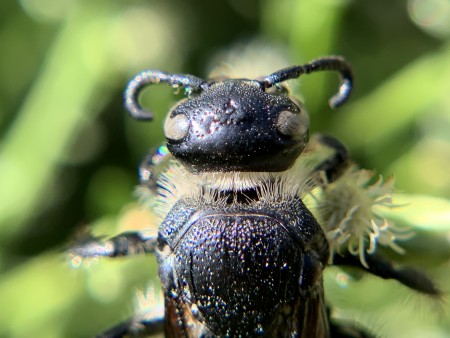 A closer look inside the hedge reveals more wildlife crawling around: lady beetles, sap-sucking spittle bugs, green grasshoppers with pink legs, and ants that feast on the dead honey bees and wasps that have fallen into the foliage. There are hunters here, too; green praying mantises and labyrinth orb-weavers wait patiently for their catch, while hairy little jumping spiders prowl and pounce.

Curator of Entomology and long-time Baccharis fan Brian Brown’s eyes lit up when he learned that I was enjoying this buzzing bush. He told me that the Baccharis attracts a chain of parasites. Big, clumsy fig beetles can be parasitized by the Toltec scoliid wasps, who pierce fig beetle larvae with their ovipositors, laying eggs that will eventually hatch inside the larvae and eat them from the inside out. Those same wasps can be parasitized by a third insect that enjoys the Baccharis, the Ligyra bee fly, whose larvae consume the wasps from the outside in. 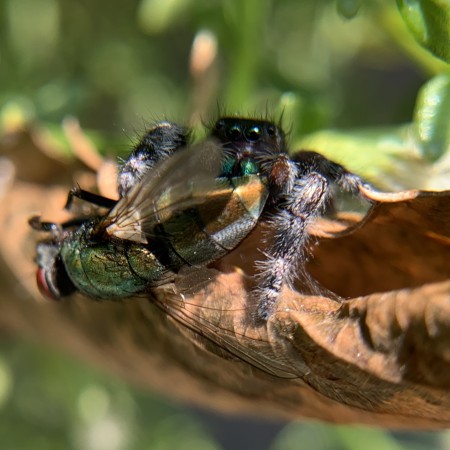 Gazing at it from my office window, I began to wonder where the coyote bush got its Latin name Baccharis. Several botany sites confirmed the obvious etymological link to Bacchus--the Roman aspect of Dionysus, the Greek god of wine and revelry--but why would anyone name this drab shrub after Bacchus? There is no apparent connection to wine or grapes. Perhaps it got its name from a botanist who happened to admire it during the fall bloom, when the great frenzy of nectar-seeking insects is reminiscent of a bacchanal--a wild feast of drunken revelry.

Looking at wildlife through the macro lens has opened my eyes to the beautiful, intricate details on the tiny animals that we often overlook. I'm happy to share this world with anyone curious about getting a closer look at wildlife, so I was in the right place at the right time when a group of high school photography students from Humanitas Academy of Art and Technology walked past the Baccharis hedge. They were carrying big DSLR cameras and phones with macro attachments, in search of hummingbirds and monarch butterflies. All I had to say was, “Take a look at all the wildlife on this bush!” and they were instantly enthralled. I pointed out the ants on the dead bee, answered a few questions about sand wasps and jumping spiders, and left them to get lost in the miniature world of the Baccharis.