La Brea Tar Pits, where a famous fiberglass mammoth “struggles” to extricate itself from the still-bubbling Lake Pit, has long been a draw for inquisitive school kids. But recently, the place has also been a magnet for several paleontologically curious undergraduates who worked behind the scenes collecting data on fossils and for 12 more students digging up the bones of real prehistoric beasts for college credit in the first-ever La Brea Tar Pits Field School.

The first group spent six weeks helping museum scientists on a multi-year project funded by the National Science Foundation to explore the impact of climate change on four big creatures that went extinct during the end of the last Ice Age (the dire wolf, saber-toothed cat, horse, and bison) and one that didn’t—the coyote.

“Our work this summer is about what bones can tell us,” explains Ellie Pitcher, an 18-year-old sophomore at Loyola Marymount University (LMU). “The things we’re looking at are how old the bones are, what the animals were eating, and their size and shape. This can tell us a little more about what the climate and environment were like when these animals were alive.”

Pitcher and her four fellow college students are giddy about their methodical task. On a typical day, one of them will carefully take a limb bone of a coyote off the shelf and start measuring it with a ruler. Then the same fossil is passed along, conveyer-belt style, to each other student to measure. It’s quality control to make sure their individual measurements are within a certain range, so the data collected is accurate. In less than six weeks, the five students measured limb bones of 2,000 saber-toothed cats!

At work in Pit 91, which has produced countless microfossils—tiny specimens such as a beetle’s wing or a rabbit’s jaw.

“We’ve started to develop favorites, which is kind of crazy,” says Margaret Dorhout, a 20-year-old student at Vanderbilt University. “We all love metatarsals, or lower hind limb, because they are very easy to measure, and heel bones because they are oddly shaped.” She says some femurs are like dumbbells, and some bison and horse bones are so huge they seem cartoonish. “When I think of traditional caveman bones, like what they’d carry around on their shoulders, that’s what I think of,” smiles Anna Yager, a 20-year-old from LMU.

The bones also tell a story of injury and repair. We can see evidence of broken bones that healed funny because there were no veterinarians back in the Pleistocene to treat them! Another way to glean more about how creatures lived is to examine the teeth of the large prehistoric animals. If there’s evidence of crunching, museum scientists say, perhaps it’s because they are stressed.

Melissa Morado, 20, an LMU senior who is thinking of studying animal behavior in grad school, says the students quiz each other on anatomy using the fossil skeletons on display around them. “We will walk through the museum on our lunch break and be like, ‘oh, look at that tibia [shinbone]. Look at that humerus [arm bone]!’”

With the help of these students, museum scientists are using radio carbon dating that can identify the age of the animals that got stuck in the tar here between 11,000 to over 40,000 years ago.

“We see Los Angeles as this big concrete jungle, and it’d be weird to think of a mammoth walking down Miracle Mile,” says Morado. “But that’s what was going on here.”

At La Brea Tar Pits first-ever Field School this summer, a dozen college and graduate students picked up the practical skills they’d need to one day crack open the secrets of the Ice Age. They learned how to excavate the bones of prehistoric creatures, scoop liquid asphalt in a deep pit, prepare fossils in the museum’s Fossil Lab, conduct research, and lead expeditions in the field. The first big-picture lesson that they learn is that they’re standing in one of the only fossil sites on Earth that captures an entire ecosystem moving through time. With millions of datable fossils covering the last 50,000 years and encompassing everything from plants and insects to big carnivores, this site offered the crew a chance to help answer a big question: what are the long-term effects of climate change and human activities on ecosystems?

One of the places they looked for answers is Project 23, named for the number of massive, fossil-filled boxes unearthed during the construction of a nearby parking garage. Each box is packed with Ice Age treasure, from mammoth tusks to mouse toes. On one Field School day, Museum Preparator Sean Campbell sat atop the just-opened Box 9 from Project 23, teaching students excavation essentials. There are bright pink strings across the top of the box, which divide the “work space” into quadrants. The grid system is set up to keep track of what they find and where. The tools they’ll use include dental picks, brushes, and solvent. 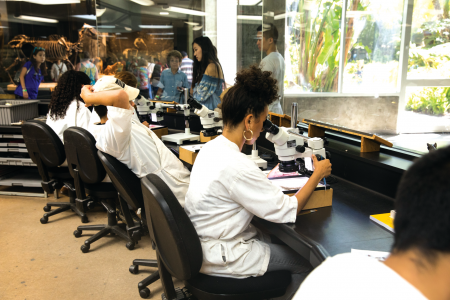 “First thing you want to figure out is, is this a rock or sediment or a mineral or fossil? Then, is it a bone, plant, or insect?” “When you use the dental tool, use the side of the blade, not the tip. You don’t want to poke into it.”

Nicole Manis, 25, who has a master’s degree in museum studies, was surprised by the strict protocol. “You don’t think a lot about how these get out of the ground. I always sort of pictured there’s a shovel and a bone comes out,” she says. “A big lesson is learning how to not mess this up!”

Allison Lipschitz, who wants to be a trauma surgeon, was thrilled to be working on real specimens. “You don’t get exposure to bones at all before medical school, and even then, barely,” she says. “I am an anthropology major, and I thought this would be more interesting than taking another class about Chinese pottery!”

Another very hands-on Field School activity is glopping. Suited up in protective gear, the students scoop into buckets the liquid asphalt and water that has accumulated in Pit 91, the lowest point in Hancock Park. Pit 91 has produced countless microfossils—tiny specimens such as a beetle’s wing or a rabbit’s jaw, that are helping scientists piece together who was eating what and what the environment was like at the end of the last Ice Age.

“There’s so much you can tell about the environment by looking at the bones,” Manis says. “It’s cool how this stuff is located right here in the middle of the city.”